The Ass In Assumptions (one) ~ Early Morning Thoughts

Assumption comes from the Latin ad + sumere, and has the meaning of "to take something for granted," "to suppose that it is true." Assumptions typically take for granted that something or other is a fact, the way things really are. The thing that makes assumptions difficult to deal with is that they largely occur at the unconscious level.

For example: Why should anyone study? One ponderous answer might be, "Knowledge is better than ignorance, or, It is more important to acquire learning than it is to know nothing. "

And a voice says: "That's certainly obvious." I wish it were, but it is not. Identifying assumptions is never obvious. Assumptions are not learned in school and then promptly forgotten -- like the capital of Britain , or the Einstein's famous formula. Assumptions are typically picked up from the culture in which we live. We acquired them as we acquired so much of our other knowledge from the culture, without being especially aware that we were learning it. (insert trumpet sounds around the above statement please)

Before going on, I need to add another little term to the discussion - construct. A construct is any idea that people invent in order to accomplish some particular end. (please insert more trumpet sounds here) A construct is not the same as an absolute truth. A construct is simply an idea which people--very often people with an agenda--have created.

I have written about how I met Toby and some of what we have gone through in an attempt to make he and I -"us."

For a number of reasons that has undergone a change, and we are going to remain in the friends category. This is a good thing. It's making maps match territories, making sure luggage tags are accurate and accomplishing what they need to on each of our life journey.

What is important now is to work hard at developing yourselves into truly wonderful human beings. Ultimately, the relationships you form are a reflection of your own state of life.

Going back to D&D for a bit - They both, but one of the D's in particular have acquired a number of assumptions from the culture we live in AND (although they would be loath to admit it) the gay culture they surround themselves with. That happens no matter what the orientation...but in this case, the one D's assumptions have stronger influences than most.

For all I know, D has some serious personal experiences that have caused some of his strong assumptions to "flower." Re quoting from above: Assumptions typically take for granted that something or other is a fact, the way things really are. Even if they are not that way.

D had placed Toby in a category based on his assumptions...even though the assumptions had little basis in fact. It started the night he told me that I "had more patience that he did what

"those' kind of people." Now, "those kind of people" is a phrase that has always had the effect on me that fingernails on a blackboard have. And usually my reaction to each is about the same. Being a product of the 60's and 70's albeit not directly in the South (except for one VERY long year) - I am extremely aware of just how that phase was said and used. 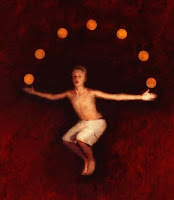 would ever show serious bigoted assumptions or anti-people assumptions at anytime. As time marched/moved/tip-toed on with Toby and me, there were other remarks that were made showing a lack of understanding.

Toby could come across negatively IF (again - IF) no one asked questions. I had no problem looking him in the eye (which is a little difficult as he is several inches taller!) and asking what I needed to know. Was there a possibility of untruth? Yes, but as I learned with children (all three of them!) truth WILL out...all you have to do is listen for it.

AS D&D would not listen let alone ask, their reactions became more and more pronounced - to me and toward Toby. I was walking a fine line that was no longer a balancing act but a high wire act without a net.

Where have you gone?