Just a short note to let everyone know, that I have moved (along with all my posts) to maturenotdeadblog.com where I now have set up shop.  Same thoughts, same snark, same ideas ... just a totally new location ... drop by and say hello ....

As if living in a house that is still unfinished isn't enough ... I'm beginning to resemble someone on the show "Hoarders: Buried Alive".  The kitchen cabinets STILL haven't arrived which means there is nothing in the kitchen except a temporary sink/counter, microwave and "hallelujah" a coffee maker!!!

I'm grateful for electronic connections and the ability to store a lot of different information so that I don't have to remember it ... however (comma)...there is a down side.

I dropped my android phone cracking the screen - rendering it useless in about 2 hours.

I got a new phone - thanks to insurance - and then the problem hit. Sprint was unable to transfer my contacts - which are backed up on gmail. No problem you say? Unfortunately, I listened to gmail and put the 2 step authentication on the account.

This process involves a program ON THE PHONE...which, of course, I don't have access to. I am now up to email 5 with gmail trying to prove that I own the #$& #@&* %&$$& account. Grrrrrrr. Hopefully, this last round will solve the problem.

But based one something their CEO said 3 years ago I don't hold out much hope:

"Mr. Badros argued that Google asks so little personal information of a new Gmail customer that it's hard to determine identity when the genuine user and the impostor both present themselves to claim the account, and neither can produce the verification. He said more information could be asked of users when they sign up, but the inconvenience would dissuade them from trying the service.

Mr. Gilbert added that proving identity with only minimal information is a problem, whatever form of communication is used to reach customer support. He said, "Even if they were standing right in front of us, it wouldn't help."" Stay tuned for information about the house ... and the email....
Posted by wd at 9:43 PM No comments:

I'm still awaiting the photos from my daughter concerning the renovations going on to the house ... sigh! Hopefully, soon....

Friday, my picky and demanding contractor (AKA "the-son-in-law" had us meet at the house to make some final decisions about electrical placement, etc. I think I've mentioned that there were various 1" level differences throughout the house. That's simply a result of the house being sliced/diced over the years. While we were there the workers were trying to remove what we THOUGHT were stick-on tiles in the sun-rooms....they were not. whoever put the sun-rooms in had placed the tiles one the WET cement and pushed them in - making it literally impossible to take up. I'm not sure what they thinking about that was, or even if they were thinking.

Regarding tile - On Tuesday my daughter/son-in-law and I went and picked out tile for the house. One of the major changes involves putting the same color tile throughout the entire house. we had a plan A and a plan B as far as color was concerned ... no problem. On Wednesday, the tile man started calling the various stores to place the order. In the size of tiles needed (18" x 18" - 45.732 x 45.72 centimeters)it was discovered that in spite of being a highlighted for sale tile, not one single store here had enough tile. Some had 10 pieces (NOT boxes) another had 100 pieces, etc. My beloved son-in-law was ready to pull the hair out of his shaved head. Then one of the stores told him it could be ordered in delivered in - oh - three to four weeks. At this point my beloved son-in-law was starting to show signs of complete melt-down.

His tile guy looked at the back of the sample piece and literally called the plant where the tile was manufactured. He discovered that 1) the tile was manufactured in a plant about 7 hours from here and 2) if they were there the next morning they would load up ALL the tiles that had been chosen (tiles,boarders, edging, etc.) as well as all the grout and other things necessary to install them.

Two of my son-in-law's workers put his trailer on the back of their truck and drove - basically all night - and picked up the tiles and drove back to get them there to have the house tile finished this weekend.

However, I was informed Friday that I have been been place on "house restriction" - meaning that I am not allowed to see the house until Monday....

I threatened today to get into "drag" and visit the house incognito. My son-in-law texts back that when he finally stopped laughing hysterically - it wouldn't work. So, I promised that I would behave and NOT go to the house this weekend. And frankly with the temperatures and heat index being in the triple digits all weekend and much of next week ... I don't plan on going too many places at all...

After reading today of Mitt Romney's decision to bulldoze his "small" house and build an 11,000 square foot addition, I'm almost afraid to write about mine. It certainly isn't anything like his ~ but after all the years I've been paying money to apartment owners, it probably will feel like it!!!

As I've mentioned my Son-in-Law is doing all the destruction/reconstuction on the house. On Monday, I thought I would surprise him and his workers by showing up - unannounced. My good friend BW drove me to the house. I don't drive, but that's for another set of posts, dear friends. I was sure I saw his truck in the driveway along with all the other vehicles. We entered the front door and as I was pushing back the plastic keeping dust and such contained - I yelled out: "My moving van is outside, where do I put all my stuff?"

As we rounded the corner, I realized that 1) he was NOT there and 2) these folks had absolutely NO idea who in the heck I was. SIGH! Fortunately, I introduced myself quickly, and the ice thawed even more quickly. I was taken on a tour and shown what was happening, and what was planned. If it is possible, I became even more excited!!! S was the fellow in charge and he explained as much as possible. He had a couple of questions for me and we made our way over piles and piles of lumber, etc. It was obvious, the dumpster had not arrived yet....very obvious.

I felt as if I'd caused enough chaos for the day, and we left more quietly than we arrived...

Wednesday, my daughter and I met J at the house for further discussions about plans and such. Unfortunately, my son-in-law IS a contractor and just as in other professions, they speak their own language. Fortunately, S was there to translate - both directions I might add.

Friday, we had to meet there again and this time, the dumpster had arrived and the place looked less as if something or someone had exploded in there and more like a construction site. There were some issues that needed to have decisions - for instance, my idea for the master bathroom had hit the reality of the space. Not a big problem, but that took some time to talk out.

This is a picture of the bathroom I'm talking about. I decided it was the winner of the "world's worst bathroom" ... to give a point of reference, it will be almost three times the size it is in the picture. 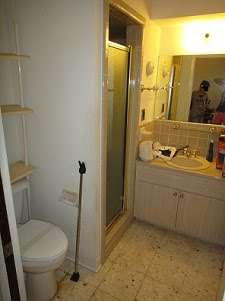 The toilet was taped closed for the estate sale - for very good reasons, and I'll leave it at that!!

More later - and hopefully, I'll have some pictures of the destruction by then!!!

And so the re-construction began this week for real. I've gone a quite a roller-coaster of emotions about this purchase. Everything from "this is wonderful" to the to be expected "OMG ~ "What am I doing, have I completely lost my mind!!!!". Let it not be said that I do something like this quietly and with no outward show of emotion.

I also made it a point to talk to my children about this ~ and they were amazingly supportive, vocal in their love of the idea and more than willing to suggest way to spend the money!!! I've been living in apartments for so long, I'd almost forgotten about what owning a home is like ~ almost.

The house had been owned by one family since 1960. The Father has passed away a number of months ago, and the Mother wasn't doing all that well. The Son came a lived with her for awhile, and decided that she needed to move back to where he lived and worked. That's how the estate sale came to be. the son helped gather the stuff up for the sale, and then the next day, he and his Mother boarded a plane. They literally locked up the house and walked away....leaving in the process an incredible amount of things ~ including the contents of the refrigerator.

The head of the estate sale outfit has his phone number and we connected by phone. It was a very positive chat and then he had his realtor call me. Several phone calls later it was decided that it would NOT be a good idea for his agent to represent both of us - so another agent from the same office called me and we were off to the races!!!

The closing was two days before our beloved congress tried to drive the economy over the cliff - really good timing on my part!!

My dearly loved son-in-law is a contractor and is doing all the work on the house. He also has a lot of work to do for various franchise owners of a certain fast food outlet. Again, with them rolling out a new menu item requiring re-doing most of the kitchens in a rather short space of time, my timing couldn't have been better.

More tomorrow or Saturday. Until then here's a teaser pic of the start of the re-construction! 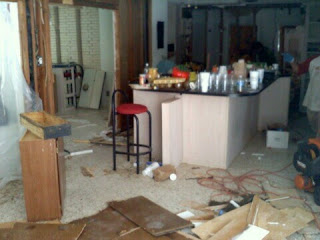 There will be a LOT more pictures of the mess of re-doing it all that I will post later. My daughter took them, and her camera does pictures that are HUGE HUGE HUGE! She'll get them to me, and I'll get them into a size that will fit....
Posted by wd at 8:26 PM No comments: