You, Too, Can Be A Banker To The Poor ~ Early Morning Thoughts

I decided that I wanted to expand on this original post from earlier this evening. I just couldn't get the idea out of my head. When I was growing up my parents were very giving to many people - some who had no idea where the "help" had come from. I enjoy helping in any way I can. When I had nothing a short time ago, it was amazing where help started coming from.

I had read about the concept of micro-lending to ordinary people overseas. The statistics of pay-back for instance have been phenomenal. Most of the micro-loans are paid back. As in, the 95+ percent range. I then ran across this article which shows how anyone can make a difference for as little as $25 dollars at at time. Nicholas D. Kristof wrote this article for the New York Times and also put it on his blog. I must have read it a dozen times - getting more intrigued and excited each time. After I post the original recap, I went to the Kiva site and have now decided where I am going to "lend" some money. I'll post more information on that Tuesday or Wednesday.

As a "lender" there will be some expectation of being repaid. However, as a "lender" I have to realized that the business might fail ... but that's part of sharing in this unique way. There is another website that accepts donations, but I decided that I liked the Kiva approach - much more business-like. 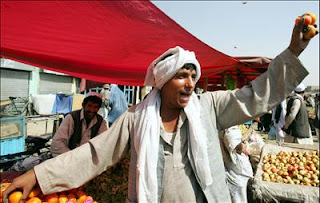 Welcome to Pottersville: Nicholas D. Kristof: You, Too, Can Be a Banker to the Poor

For those readers who ask me what they can do to help fight poverty, one option is to sit down at your computer and become a microfinancier.

That’s what I did recently. From my laptop in New York, I lent $25 each to the owner of a TV repair shop in Afghanistan, a baker in Afghanistan, and a single mother running a clothing shop in the Dominican Republic. I did this through www.kiva.org, a Web site that provides information about entrepreneurs in poor countries — their photos, loan proposals and credit history — and allows people to make direct loans to them.

So on my arrival here in Afghanistan, I visited my new business partners to see how they were doing.

On a muddy street in Kabul, Abdul Satar, a bushy-bearded man of 64, was sitting in the window of his bakery selling loaves for 12 cents each. He was astonished when I introduced myself as his banker, but he allowed me to analyze his business plan by sampling his bread: It was delicious.

Mr. Abdul Satar had borrowed a total of $425 from a variety of lenders on Kiva.org, who besides me included Nathan in San Francisco, David in Rochester, N.Y., Sarah in Waltham, Mass., Nate in Fort Collins, Colo.; Cindy in Houston, and “Emily’s family” in Santa Barbara, Calif.

With the loan, Mr. Abdul Satar opened a second bakery nearby, with four employees, and he now benefits from economies of scale when he buys flour and firewood for his oven. “If you come back in 10 years, maybe I will have six more bakeries,” he said.

Mr. Abdul Satar said he didn’t know what the Internet was, and he had certainly never been online. But Kiva works with a local lender affiliated with Mercy Corps, and that group finds borrowers and vets them.

The local group, Ariana Financial Services, has only Afghan employees and is run by Storai Sadat, a dynamic young woman who was in her second year of medical school when the Taliban came to power and ended education for women. She ended up working for Mercy Corps and becoming a first-rate financier; some day she may take over Citigroup.

“Being a finance person is better than being a doctor,” Ms. Sadat said. “You can cure the whole family, not just one person. And it’s good medicine — you can see them get better day by day.”

Small loans to entrepreneurs are now widely recognized as an important tool against poverty. Muhammad Yunus won the Nobel Peace Prize last year for his pioneering work with microfinance in Bangladesh.

In poor countries, commercial money lenders routinely charge interest rates of several hundred percent per year. Thus people tend to borrow for health emergencies rather than to finance a new business. And partly because poor people tend to have no access to banks, they also often can’t save money securely.

Microfinance institutions typically focusing on lending to women, to give them more status and more opportunities. Ms. Sadat’s group does lend mostly to women, but it’s been difficult to connect some female borrowers with donors on Kiva — because many Afghans would be horrified at the thought of taking a woman’s photograph, let alone posting on the Internet.

My other partner in Kabul is Abdul Saboor, who runs a small TV repair business. He used the loan to open a second shop, employing two people, and to increase his inventory of spare parts. “I used to have to go to the market every day to buy parts,” he said, adding that it was a two-and-a-half-hour round trip. “Now I go once every two weeks.”

Web sites like Kiva are useful partly because they connect the donor directly to the beneficiary, without going through a bureaucratic and expensive layer of aid groups in between. Another terrific Web site in this area is www.globalgiving.com, which connects donors to would-be recipients. The main difference is that GlobalGiving is for donations, while Kiva is for loans.

A young American couple, Matthew and Jessica Flannery, founded Kiva after they worked in Africa and realized that a major impediment to economic development was the unavailability of credit at any reasonable cost.

“I believe the real solutions to poverty alleviation hinge on bringing capitalism and business to areas where there wasn’t business or where it wasn’t efficient,” Mr. Flannery said. He added: “This doesn’t have to be charity. You can partner with someone who’s halfway around the world.”

Here is the link to read the entire blog post: Welcome to Pottersville -

And here is the link to Kiva: www.kiva.org

I have decided that I am going to lend $25 dollars to three businesses. I won't be as fortunate at Mr. Kristof and be able to travel to see each business, but just knowing I have had a part will be wonderful!

Anyone else up for some grass roots banking?

This really is an interesting concept. I might have to give it a try as well. Thank you!