This has been an interesting three days. 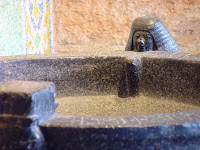 Saturday, I decided to drop by a favorite "watering-hole" for a VERY gentle libation...I was having coffee, believe it or not. While talking to a dear friend who is the bartender, I noticed a friend I hadn't seen for several months. We starting talking and when we got to the "And what are YOU doing?" part ~ he told me that he had starting managing an apartment complex.

We discussed that for several minutes, and then he let the thunder roll. "We're looking for another manager, do you know someone who might be interested?" Avoiding the temptation to jump up and down and squeal, I casually mentioned that I might be interested. (me being someone, by the way, that's been out of work for a "bit")

"That's great," was the reply, "the boss is right over there, let's talk to him." Talk about being struck to almost silence. So, off we went to chat with the boss. He turned out to be quite the business man, and VERY business oriented. We talked for awhile and I found out more about the job.

I said that I was very interested. He wanted to meet on Monday to talk further. I gave my friend my new phone number and thought that was the end of that. I've had these kind of job suggestions on bars before - and they come through about as often as "let me have your number and I'll call you next week."

Sunday evening, I got a phone call to confirm that I was indeed going to meet with them on Monday and to finalize the time and place. At this point I was speechless ~ but wait ~ there's more. (including the lighting strike!)

When I went down today (Monday) I did know they were getting rid of the current manager of one of the complexes ... what I did not know.......

When we arrived at the complex, my friend and I were outside looking at some work that needed (definitely) to be done. The "big boss" went inside, fired (terminated) the current manager - who knew it was coming - and after he'd cleaned out his desk - came out, called me in and informed me that I was now the manager. 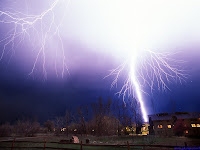 THAT'S when the lighting struck. You see, I've been looking for work ~ but when you reach a certain ... ahem ... age, finding a job is not that easy. Ageism is quite alive and well - although no one really talks about it ~ and it would NEVER be the reason they give for not hiring someone. However, I have very firm spiritual beliefs - and I knew that at the right moment, at the right time - I would find something. Little did I know it would be within 72 hours.

Before you "fuss," that kind of change-over is VERY common in the apartment industry ~ I've had it happen to myself as well...although not quite that quickly. Unfortunately, when it happens that way, there is no kind of hand-over of information. In this case, I'm not sure he would have been able to hand over much information anyway. And as I began to undo the piles of "stuff" - the former manager had brought many of the problems on himself.

The apartment complex while somewhat small (60 units) is none-the-less, going to be a real challenge over the next several days.

I have uncovered and unearthed that payments were incorrectly posted, not posted or even worse - leases not completed. Not a good sign. The stacks of papers that made little or no sense, were another less than promising sign. When I tried to rent an apartment that was listed as being vacant - but was actually quite occupied, was probably the final straw. (Oh, yes and I had to turn on all my charm when the tenant of the apartment got home from work and one of her neighbors casually mentioned someone was looking at her place to rent ... let's just say she arrived in my office in "high shriek" ...but let chuckling at the end.)

Having been through a "clean out your desk" situation myself, I have always tried to be supportive of people who have gone before. Not after that incident. I had my excuse for any problems I couldn't immediately solve. "I'm still trying to solve what the previous manager did ... I'll get back to you."

The issues at the complex are going to really occupy my time for the next few days. For example, I'm going into the office tomorrow morning at 5:30am to see if I can sort out the postings on the computer program and compare them to the hard copies.

I know for a fact, that I will not post here until Friday - so be patient with me. I will be back. And some good thoughts would be most appreciated. And trust me, I will have a wealth of stories to tell you when I get back on Friday!!! And probably from then on as well!!!

I am so happy that this job found you. I know you will be able to turn this place around in no time.

Don't work too hard and stay in touch.

Good on you! I'm sure you will be the best manager around and turn the complex into a cheerful and dynamic place. :)