Surprised - But Not By Joy ~ Early Morning Thoughts

Tuesday, D&D and I decided to get together for a bit. 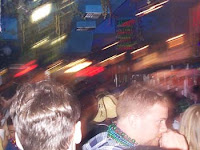 We were going to celebrate several things, talk about plans - and have an enjoyable early evening. We had a wonderful late snack, and again headed to one of our favorite places - which was as packed as any place serving $2 well drinks (all night) would be. As noisy as it can get - it is possible to still have a conversation that doesn't involve shouting into someone's ear as if you were trying to break their ear drum, or trying maneuver around a "gaggle" of S & M (stand and model) types clustered around with blank expressions or expressions of absolute horror at someone who doesn't measure up.

D&D had to run a couple of quick errands - and I decided to stay behind and wait for them. At this point, the popcorn (yes - fresh popped) and free chicken (of the fast food variety - thank you very much!) were sounding quite good. I was sitting and enjoying the snacks and people watching. J came over and sat by me. 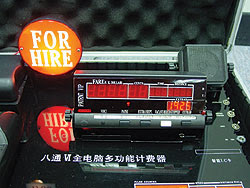 We had chatted for a moment as I was making my way to the rest room - other than that I had never seen him before. He was pleasant , charming and ... a hustler. Now, I have a very different approach then most folks. First of all, I'm not going to pay them. Nor will I buy them a drink if they ask me. (oh, and by the way - the quickest way to end ANY conversation is to start a sentence calling me Daddy. I've raised my three ... there are going to be no more!) So, that puts a totally different slant on most conversations. As a matter of fact, one of my more famous lines has been: "Don't drop your meter, I'm not getting in your cab." I enjoy people...and they, after all, are people. I've had a lot of fascinating conversations and laughs with them - as with most people. I bought him a drink, we chatted for a bit , he shared a couple of horrendous jokes and then he toddled off to find someone else. The point of all this: there was a feeling that I couldn't quite put my finger on.

Later, after D&D's return from successful errand running. Toby (not his real name or initial) whom I had never seen before, literally came and starting "working" me...

I'd use the term hitting on me, but I didn't want to give the impression of violence. I found that unidentified feeling really rubbing me ... and then I realized with a shock what it was. I was surprised by cynicism. Actually a very deep rooted cynicism. Something I was totally unprepared for, and unaware of how much I had.

cyn·i·cism(sĭn'ĭ-sĭz'əm)-n- An attitude of scornful or jaded negativity, especially a general distrust of the integrity or professed motives of others:

And how was it expressed? Thank heavens only mentally. I think I realized it before it became expressed either in body language or verbally. My inner reaction was one of very high mistrust of the integrity of him and his motives.

Immediately upon Toby's coming to sit down with us, I felt distrust and continual questioning of motives. He had not given me any reason for acting that way. I simply had placed him into a neat little category and was starting to react accordingly.

Cynicism is not realistic and tough. It's unrealistic and kind of cowardly because it means you don't have to try.
--Peggy Noonan (1950 - )

Had I not realized what I was doing, 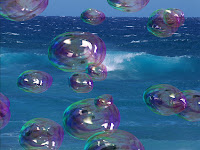 I would have lost a wonderful time with a delightful person - who went out of his way to affirm someone he barely knew, and who treated me as a terminal romantic desires to be treated. And it troubles me that my response could have been less than kind or open. I would have lost any reasonable conversation with someone who is delightfully informed and drew out of me some amazing shared interests.

Regardless of orientation, cynicism creates incredible boundaries and barriers to life and other people. Of course, I'm not talking the healthy questioning of motives and such. Let's face it the person that calls during dinner to tell you about that stock you just HAVE to buy, or the people at your door with the magazine to help you find your way, all have motives that need to be guarded against. Or the person who you've just met that wants to "take" you somewhere.

That's not where I'm heading with this. If I had let my cynicism take over, I would have cut off all avenues for any discussion, any sharing and any enjoyment of time with this person. And I would have lost for myself as well. I'm not talking about not being careful what is shared, what is decided and such.

I'm merely talking about being with another individual and enjoying them as they are ... not continually questioning how they should, could or might be.
--more on this later
--Seal picture by Rolf Hicker
http://www.hickerphoto.com/amazing-animals-7912-pictures.htm

I'm a cynic too...experience has given me that hard edge. I trust few and distrust many.