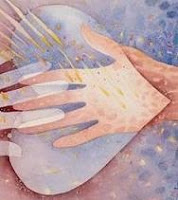 I have talked about Jesse and Yen from Two Lucky People before. These two people, so deeply in love, epitomize the kind of relationship - regardless of orientation - that is powerful, fulfilling and (I'm probably embarrassing both of them) an example to others of just what can happen if a relationship is worked at...by both people.

A quick history - Jesse has an aggressive form of melanoma and has undergone some serious treatments. The last was a series of highly toxic (read deadly) infusions. There were to be 15 of them, but only if his body could handle it. It couldn't. At one point Jesse was "out of it" ...

...the disorientation from the drug has intensified, cheating him of present reality.

Boxed in a hospital room at New York-Presbyterian, he thinks we are in North Carolina, at an elaborate, colorful circus show...

But Jesse is a fighter, and with Yen's love ...

When I rouse from my sleep next to Jesse’s hospital bed this morning, he is already awake.

“Happy Valentine’s Day, my love,” I lean across and kiss him on the cheek. “What day is it?” he asks. “Wednesday.”

Along the way, both had to learn and relearn some important lessons...

When hope to rekindle memories starts to wane, when your lover is changing, deteriorating, it becomes a challenge to keep loving. Every day is a lesson in patient loving. Every day you relearn how to love again(emphasis mine).

Finally Jesse was released from the hospital cage and came home...when I write about their home, I almost feel it should be capitalized...one of the first posts I read showed part of their apartment - and it is more than just home ... they and their love have turned it into a Home.

They took some time and went on a vacation. While Yen wasn't sure it was a good idea ...

We were both angry with ourselves, and with each other...So while a vacation away from New York seemed like the perfect solution to two cramped, stretched souls, it also seemed to me the worst thing we could do for our relationship...

Then I was blessed to read a post by Jesse. It was the first time I'd had a chance to "meet" him, and I was so impressed and pleased to "sense" that what I had thought of his character and love was not wrong...

I was sick all day yesterday and as a result, just sort of sat there during dinner, only able to eat half the bowl of potato soup I ordered.

This once again is contributing to Yen becoming more and more frustrated about everything.

Hell, if I can’t even enjoy a decent meal with him, then it’s like he’s taking care of an invalid, isn’t it? Thanks to everyone who reads Yen’s blog. He’s such an amazing person that I wish everyone of you could meet him in person. I’m so proud to have him as my boyfriend...

And, when someone least expects something to happen, in a small moment...

...In that moment, I briefly forgot my anger and smiled at Jesse. In that moment, sweetened by the rarity of street dessert, the same light that first revealed his face to me, shone in my heart again...The turn was immediate, unexpected, and perfect in its ordinariness.

We were sitting in the lounge, on separate day beds, each with our own books...Jesse asked me to come sit by him. I agreed. It was not long after that we were both lying in a comfortable tangle of limbs - his legs stretched over mine, my arms wrapped around his thighs.

Resting so, we continued to read, my head slack on his stomach as his fingers caressed the side of my head. Once or twice, he catches me biting my nails, and smacks me disapprovingly, but gently. We continue to read like this for two uninterrupted, beatific hours.

As I have said before - 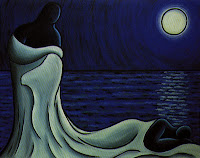 these two are an example of: "for better or worse, for richer or poorer, in sickness AND in health..." But while on this roller-coaster of illness - they also show another important point that I have touched on in others posts here - love IS a choice and is not without an emotional price sometimes.

Perhaps everything that frightens us is, in its deepest essence, something helpless that wants our love
--Ranier Maria Rilke

However, shining through the blog, is the amazing truth that is so often is forgotten. Emotions are neither right nor wrong...they just are. It's what we do with them that creates the right or wrong. And, since it hasn't been that long ago I climbed out of the cave of feeling nothing and caring about nothing - that's a liberating statement.

Many people are under impression that they should be happy all of the time...that if you are not happy then something is wrong with you. To quote my Father: Horse feathers!

That is not what the human experience is about! Happiness is only one of the many emotions we are meant to experience. Many children are not taught how to appreciate the beautiful emotional self or how to be with feelings. As children most of us were not given an emotional vocabulary, a way to talk about our feelings. Instead we are handed a set of "standards" that have little or no relationship to the world - or emotional health: “It is weak to show emotions … Real men don’t cry … It’s not o.k. for girls to be angry.”

To re-quote what I said earlier: Emotions are neither right nor wrong...they just are. It's what we do with them that creates the right or wrong. And if people have no life vocabulary to deal with emotions, then how are they going to know what to do with them? When my Father was ill, my Mother had to develop more than just a new vocabulary for emotions, she almost had to come up with an entire new language.

As I read Jesse and Yen's experiences, there is a sense of the emotional vocabulary that is growing and becoming part of the love and life experience. Would I expect all to be perfect and "wonderfully solved in 10 minutes" kind of existence? No, that kind of life exists only in TV sitcoms and Lifetime movies. But as I've learned through some spectacular personal failures, when two people are working on something, it becomes a lot easier to deal with.

Go back and re-read Yen and Jesse's blog. The emotional is there - but the solutions and/or understandings of the emotions are there as well. 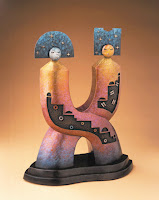 And I am grateful to be a small part of their life, love and emotions. To be able to share in my own small way their journey together. That's a wonderful phrase isn't it - journey together. The transparency that is there is a strong reminder to me about being transparent to my friends - and hopefully, eventually to someone to love - for better or worse, for richer or poorer, in sickness and in health.

But in the long run -
shouldn't we do that with everyone we care about?